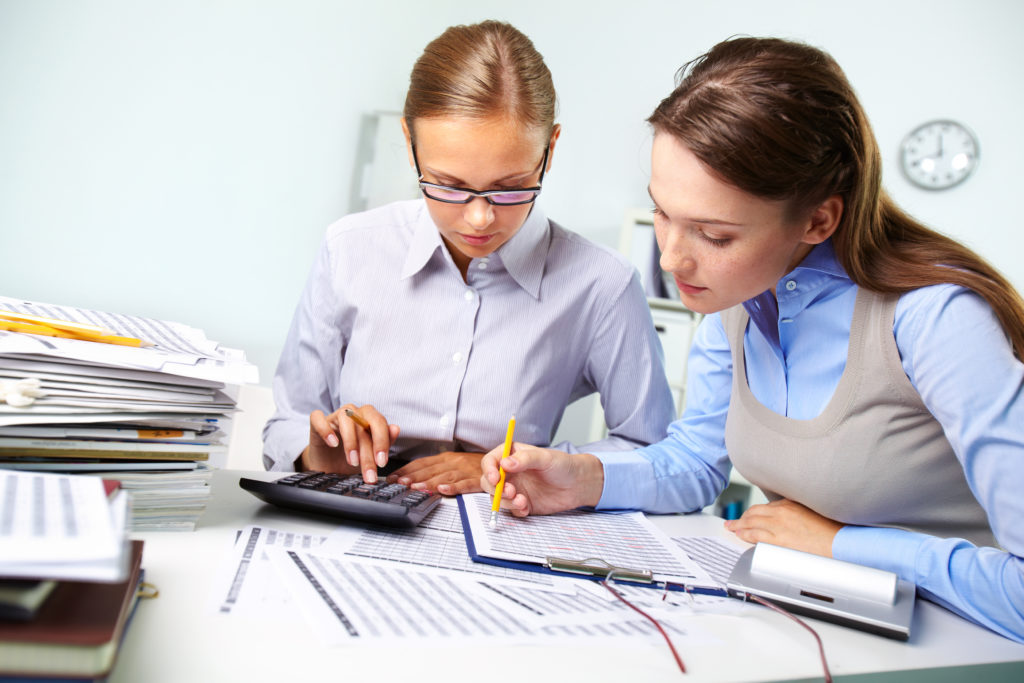 VaR (Value at Risk) is a statistical measure used to measure the risk of potential losses for a company or an investment. In finance, it is a widely used metric by risk managers, asset managers and, in general, industry insiders to measure and control the level of risk exposure.
VaR can be estimated for specific assets or for entire financial portfolios. This measure is appropriate for measuring market risk for asset classes with different characteristics such as stocks and bonds and has the advantage of being comparable. It is also a recognized metric used by Regulators.

Financial institutions have various obligations and limits to meet, and VaR is used in this context.
Specifically, the VaR measures the maximum expected potential loss over a given time horizon (e.g., one day, one month) with a given confidence interval (e.g., 99%, 95%). For a financial portfolio, a 99% one-month VAR that is worth -3% indicates that the portfolio has only a 1% probability of losing more than 3% in the following month.

This parameter can be calculated by following different methodologies, here we will compare two approaches:
• Historical Simulation (HS): the VaR is estimated simply by calculating the percentiles (e.g., 1 and 5) of the returns that the current portfolio would have experienced over the past 2 years while keeping the composition fixed.
• Parallel Filtered Bootstrap (PFB): this approach is more sophisticated and uses ARMA-GARCH models to identify unexplained residuals and perform Monte Carlo class simulations on these.

What characteristics must a VaR have in order to be effective in measuring risk and supporting asset allocation processes?
We believe it must be highly responsive in both risk-on and risk-off market phases. It is important neither to underestimate nor overestimate risk. Different market phases are extremely complex and potentially useful for reallocating and rebalancing the portfolio. Therefore, it is important to have dynamic and accurate estimates.
To give a concrete answer to this question, we thought of comparing HS and PFB VaR estimations for a UCITS Equity Fund during 2020 and 2021, years characterized by several extraordinary events and high volatility The graph shows the performance of the MSCI World index (in blue on the right axis) as a market indicator, the 95% one-month horizon VaR, using HS method (in orange) and PFB method (in gray) on the left axis. 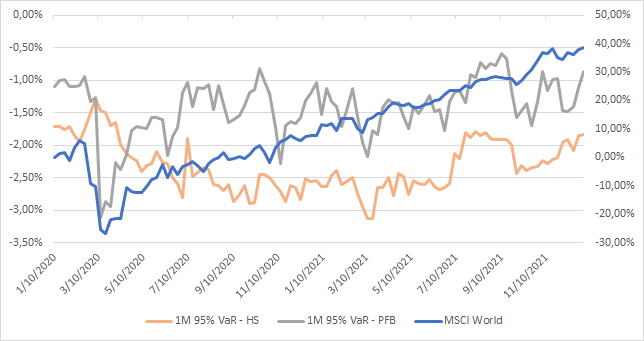 The PFB VaR was responsive during the market crash in early 2020, reaching a low on March 13 (compared
to the market’s March 20 low). In contrast, the HS VaR was less responsive and would not have been an
appropriate indicator of risk at this stage.

It is important to note that even in the recovery phase of the equity markets, the PFB reacted more quickly
to the return of volatility to more acceptable values, while the HS maintained an overly conservative estimate of expected risk for many months.

If the portfolio had been managed with a VaR control policy, the use of HS would have prevented the manager from taking advantage of upward market opportunities in the latter part of 2020 and much of 2021, while the PFB would have given estimates more consistent with the dynamics of equity markets.
Finally, to further evaluate the effectiveness of the PFB model, a test can be conducted on a real UCIT Fund
portfolio. The backtest simply consists of calculating how many times the portfolio experiences losses greater than those previously estimated by VaR, i.e., failure rates (POF).

On the graph, failures are visible when the blue line (portfolio return) crosses the lines representing VaR. 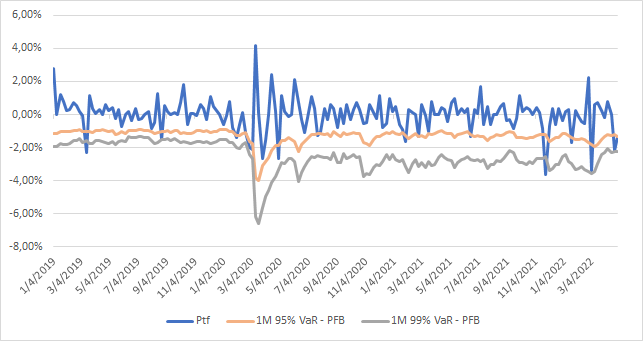 In order to be able to say that the backtest results meet the expected quality of the VaR estimation model,
we apply the Kupiec test on the hypothesis that the number of failures recorded ex-post is consistent with
the expected percentage (1% or 5%) given a chosen confidence level (typically 5%).

The result of the Kupiec test, performed on these data, largely rejects the hypothesis that the failures of the
one-day 99% VaR and 95% VaR estimates obtained with the PFB during 2019-2022 are statistically different
from the expected 1% and 5%.

In conclusion, the PFB is a risk estimation model that has the ideal properties for portfolio management, its
errors in estimating 99% VaR and 95% VaR are statistically acceptable while it is able to react quickly to
changes in market volatility, both up and down, helping the manager to take the right level of risk.

This website uses cookies to improve your experience while you navigate through the website. Out of these, the cookies that are categorized as necessary are stored on your browser as they are essential for the working of basic functionalities of the website. We also use third-party cookies that help us analyze and understand how you use this website. These cookies will be stored in your browser only with your consent. You also have the option to opt-out of these cookies. But opting out of some of these cookies may affect your browsing experience.
Necessary Sempre abilitato
Necessary cookies are absolutely essential for the website to function properly. These cookies ensure basic functionalities and security features of the website, anonymously.
Functional
Functional cookies help to perform certain functionalities like sharing the content of the website on social media platforms, collect feedbacks, and other third-party features.
Performance
Performance cookies are used to understand and analyze the key performance indexes of the website which helps in delivering a better user experience for the visitors.
Analytics
Analytical cookies are used to understand how visitors interact with the website. These cookies help provide information on metrics the number of visitors, bounce rate, traffic source, etc.
Advertisement
Advertisement cookies are used to provide visitors with relevant ads and marketing campaigns. These cookies track visitors across websites and collect information to provide customized ads.
Others
Other uncategorized cookies are those that are being analyzed and have not been classified into a category as yet.
ACCETTA E SALVA